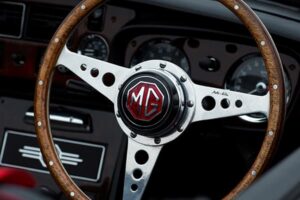 Our parent club is the MG Car Club in the United Kingdom. Founded in 1930, it is one of the largest such organizations in the world with over 85 Centres around the globe, of which we are one. That meeting began the long association between the MG Car Company and the MG Car Club that only ended in 1969, when British Leyland cut its ties with the club. Additionally, our club is affiliated with the MG Owners’ Club of England that was established in 1973. The MG Owners’ Club now counts over 50,000 members, making it the largest, single marque automobile club in the world.

In the years since our founding the club has sponsored numerous activities and received its share of awards. Membership as of early 2023 is just over 200 members. Club events have and continue to run the gamut of car-related activities from hands-on tech sessions to casual driving and social events, with something for anyone who has an interest in MGs.

In 1996, we sponsored our first annual Hunt Country Classic British Car Show in Middleburg, Virginia and it has become one of the most popular British Car Shows in the region. Our 25th annual show was scheduled for October 2020, but as with many such events in 2020 was cancelled due to health and safety concerns rising from the coronavirus pandemic. One of our oldest and most enduring events is the Braille Rallye, first run in 1963. It is a time and distance Rallye during which members navigate a course accompanied by sight impaired partners providing directions … in braille or large print depending on the impairment of the navigator.

Simply owning an MG can be lots of fun, but sharing that experience with other MG enthusiasts adds a whole new dimension to enjoying your car. The MG has earned a reputation for being honest, straightforward, and forgiving, and the same is often said about MG owners: we tend to be unusually enthusiastic about our cars and naturally enjoy sharing our enthusiasm with other MG owners. MG people have been doing this through clubs all over the world since the first MG Car Club meeting in 1930.

In 1980, production of MGs (as we know them) ceased. Although parts availability has not yet become a problem, it has become increasingly difficult to find shops qualified to maintain or repair MGs. The objective of the club is to preserve the marque and maintain the traditions established over the years since its inception in 1951. Our efforts include sharing technical knowledge and teaching other MG owners how to maintain their cars, sharing supply sources, generally lending a hand to help keep our irreplaceable cars on the road, and having a good time doing so. Many volunteers make our club activities possible with countless hours spent ensuring we continue a tradition of excellence and inclusion.

Not a member already?